As I Died Laughing 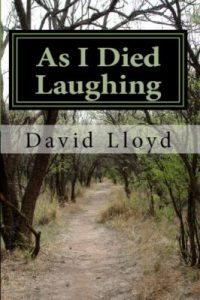 He couldn’t remember when he had stopped seeing himself in her eyes, their marriage becoming simply a collection of memories, where only the mundane held them together.

It seemed so simple at first: creation. Characters whose lives he carved out in his novel. And now this: a man created in his own image and likeness, stepping out of the virtual into the real, in order to seduce his wife.

The following is an excerpt from the book:

He didn’t know how long he had been out. He was awakened by the tapping of fingers. He raised his head and saw that they were his own fingers. The tapping grew louder and the ticking softened, until it almost disappeared. Looking up at the clock, it appeared that time had stopped. But it was only an illusion. Nothing was real. Nothing could be at that moment.

The words hung above him on the screen, useless, without his divine intervention. Guy was waiting. His creation, created in his own image and likeness. Waiting for the breath of life, which could only be when he had dotted the final i. Crossed the final t.

He pulled himself up and sank back into the chair. All around him was black. There was only one way forward. The light from the screen beckoned. But the words were blurred.

Eighteen years. Ended before it had begun. The ticking had stopped. He could turn back time now. Or at least cheat a little. A time warp, an invention of another world. She was waiting.

Michael leaned forward and reached for the glass of whiskey. He didn’t remember pouring the drink. Or raising the glass. Not until he felt it bite into the back of his throat. He could see the words clearly then. Dancing in front of him. Taunting, celebrating the moment, daring him to go back. He set the glass down on the table, his hand unsteady.

His fingers reached out and clasped the mouse, its hard cold plastic foreign to his touch. Edging it slowly, he reached across the screen until one finger hung poised above the only button that made any sense.

He didn’t remember the moment of execution. He could always claim that. Denial. It had served him well until now. But it was gone. A letter sent. A letter that might change his life.

Buy the eBook (kindle):
Amazon US